The Anatomy of a Deal

How economic development projects bring wages to our community. 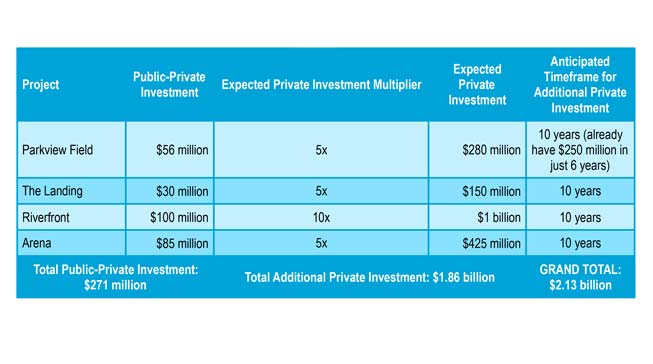 With 70 proposed projects as part of northeast Indiana’s plan for the $42 million in gap funding provided through Regional Cities, questions of how development deals are put together, who contributes what and who makes money when, have become an important part of the conversation.

Greater Fort Wayne Inc., as the local economic development entity, helps lay the foundation for development by showing investors the potential to get a good return in Fort Wayne over other parts of the country.

As projects like the Ash Brokerage Building or Skyline Tower get funded, the risk is on the investor. The investor must start with equity, or cash in-hand. For example, on a $30 million project, the investor generally would bring $3 million (10 percent) in cash to the table. They would have to secure a loan for 50 to 80 percent of the cost, depending on the project type (retail, residential, office, etc.). Using 75 percent in this example, the investor would borrow $22.5 million dollars.

The investor typically must personally guarantee the repayment of that $22.5 million loan, either in part or in whole, to ensure proper motivation for the project to be built on time and under budget, and is leased per the projections given to the bank. Investors do not make money on the construction of a building. They only make money after the space is leased. For a private investor with a high risk of investment, projects require an anticipated 18 to 22 percent return.

So, the investor has a combination of cash and bank debt of $25.5 million to fund a $30 million deal. This leaves a gap of $4.5 million. This is where Regional Cities and other public funding tools, like tax phase-ins, tax increment financing and historic tax credits, come into play. Public-private partnerships allow the community to provide that $4.5 million (15 percent) to make the project happen.

Why would the investor not reduce the size of the project to $25.5 million or add more equity?

If the project size is reduced, the rent revenue decreases, causing the bank to decrease the loan, leaving a similar gap on a smaller project. If they increase the equity, returns decrease from the required 18 to 22 percent, to 8 to 10 percent or less. When this happens, the investor no longer sees value in taking the risk because of lack of return. This is why large projects in cities the size of Fort Wayne have difficulty getting started in today’s credit and investment environment.

When the public funds a project at 15 percent and gets the additional 85 percent with the cost and risk falling on the investor, the community is getting $8.50 of development for the price of $1.50. As more development occurs and the economy grows, the amount of funding needed from the public sector begins to shrink.

It is also important to consider how the $30 million is spent constructing a building. On average, 50 percent of the cost of a project is labor. As such, $15 million of the project pays wages to the construction professionals. The remaining $15 million is spent on materials, which includes the cost of wages to manufacture those materials. So, of the $30 million, more than $15 million goes back into our economy in the form of wages that are often spent at local businesses.

With a traditional tax phase-in, the property taxes collected on a development appraised at $30 million bring in $4.5 million in tax revenue in the first 10 years, and $900,000 per year thereafter, funding services from local government that impact the quality of life.

The community is not only getting the benefit of using that project, the $22 million in new wages and the tax revenue; in addition, projects like some proposed in the Regional Cities plan or the downtown arena are expected to generate additional private investment nearby as the public-private projects are completed.

Take Parkview Field, for example. The stadium and parking garage were a $56 million project and resulted in $250 million in private investment in the first 6 years. This kind of success generally takes 10 years to accomplish in other cities that have been studied.

So what’s the bottom line?

As the community supports important development projects, like the $100 million riverfront and the $30 million redevelopment of The Landing, the region will see millions of dollars in both wages and tax revenue.

These figures are based on just a few projects, so imagine what we can do when we join together to support economic growth and development. The future is greater and it’s up to us to support these efforts in order to strengthen our community. 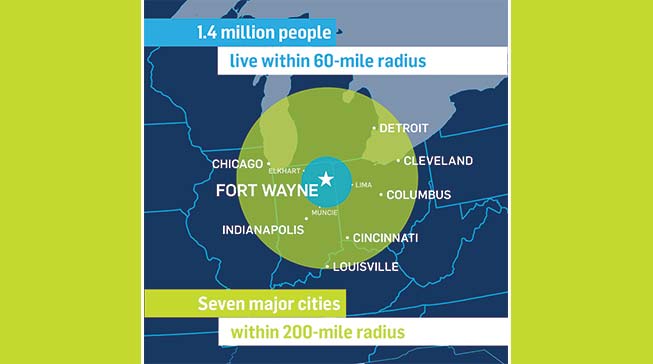 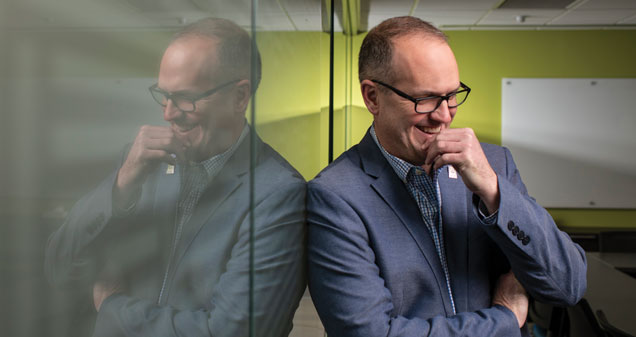 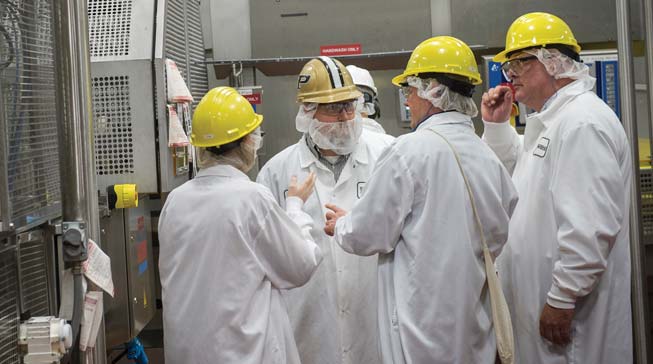 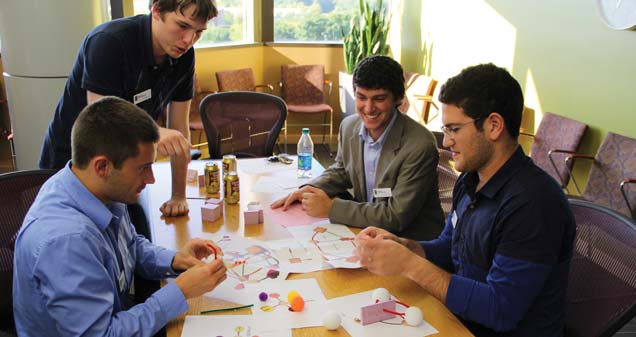 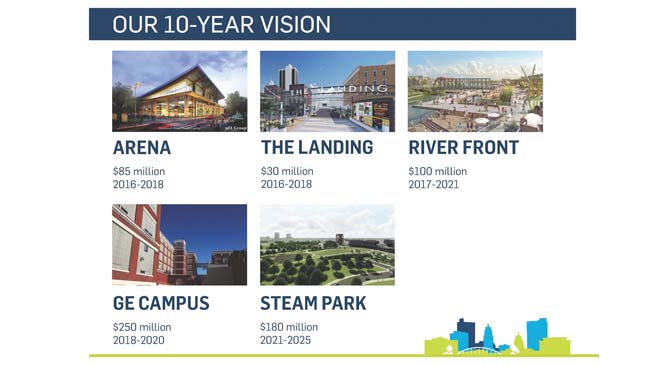 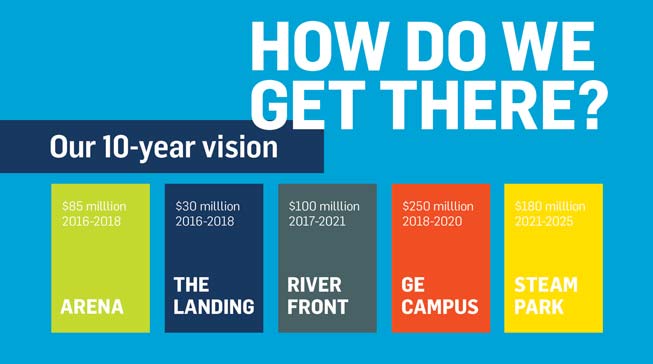 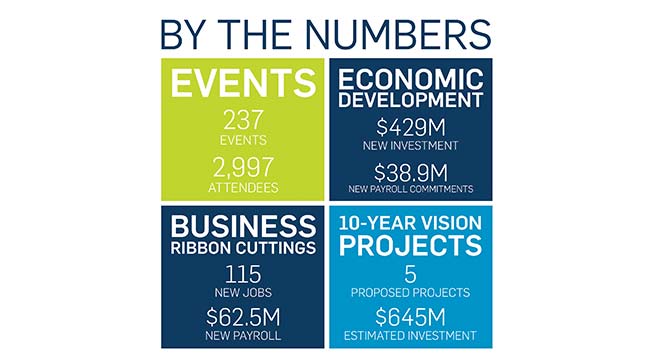 A Year in Review Greater Fort Wayne Inc.'s Work in 2016 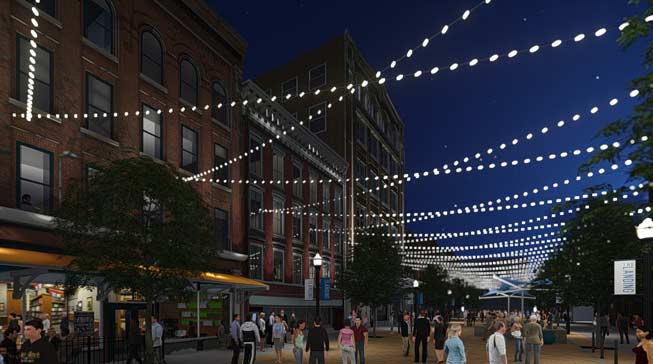 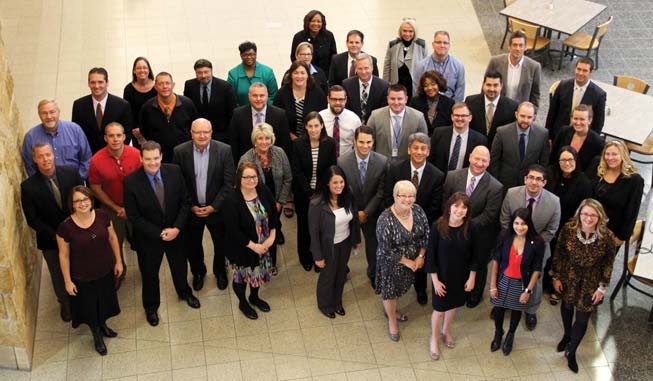